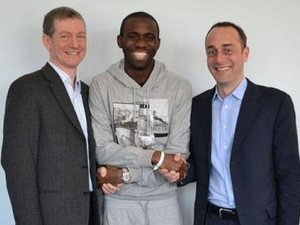 Bolton midfielder Fabrice Muamba was finally discharged from a London hospital on Monday following his recovery from a cardiac arrest on the pitch.

The 24-year-old was left fighting for his life after collapsing during the first half of Bolton's FA Cup quarter-final at Tottenham on March 17, which was subsequently abandoned.

The Kinshasa-born star's heart stopped for 78 minutes as medics battled to keep him alive at the stadium and then in the London Chest Hospital, but he has since made rapid progress and will now be taking it easy with his family.

"I am naturally very pleased to be discharged from hospital and would like to take this opportunity to pay tribute to every single member of staff at The London Chest Hospital who have played a part in my care," Muamba said in a statement.

"Their dedication, professionalism and expertise is simply amazing and I will forever be in their debt. I also wish to say thank you to all the many well-wishers who have sent thousands of messages of support.

"Now I am out of hospital, I am looking forward to continuing my recovery and spending precious time with my family."

A spokesman for the local health trust confirmed that Muamba had been discharged and all their staff wished him the very best in his bid to return to playing football again.

His discharge from hospital comes two days after the death of Italian footballer Piermario Morosini, aged just 25, who suffered a heart-attack while playing for Livorno against Pescara in the second-tier Serie B.

"It is absolutely fantastic news that Fabrice has been discharged from hospital and everyone at the club is delighted," he said.

"We would also like to add our thanks to the staff at The London Chest Hospital for their care and treatment of Fabrice, which has been outstanding.

"It is important that Fabrice and his family are now given time and space to be together."

Muamba was born in what is now the Democratic Republic of Congo but came to Britain at the age of 11, going on to represent his adopted England at under-21 level.

He celebrated his 24th birthday in hospital on April 6, buoying fans of the club and his many well-wishers around the world who had responded to his collapse and treatment with an outpouring of support.

Bolton are in the English Premier League relegation zone, with six games to go.

They have won two and lost three since Muamba's collapse.