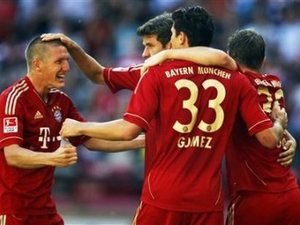 "It's all or nothing on Tuesday," said the Germany star, with Munich's Allianz Arena set to also host this year's Champions League final on May 19.

"We have to go to the limits and beyond, but we can do it with our fans behind us.

"It won't be easy, and it comes down to mental strength. I hope we show that mentality which is a Bayern trademark."

Real warmed up for Munich with a 3-1 win over Spanish league strugglers Sporting Gijon on Saturday with Cristiano Ronaldo scoring his 41st league goal of the season, a record achievement currently matched only by Barcelona's Lionel Messi.

In contrast, Bayern were held to a goalless draw in Munich by mid-table Mainz which effectively handed the German league title to Borussia Dortmund with Bayern eight points behind with three games left.

Real fielded virtually their full strength side at the Bernabeu, even with Sporting second from bottom of the Spanish league.

"This game was important for us and then on Tuesday we will put out the team that we think is right to get a good result," said Real's assistant coach Aitor Karanka.

"Now all the games are important and before we play Barcelona (in El Clasico next Saturday) we have Munich and that is all we are thinking about.

"It will be very tough, but we will go to win and Madrid are always favorite."

Madrid will certainly provide Munich with their toughest test of the season so far, but Bayern have already beaten Premier League giants Manchester City 2-0 at home in the group stages.

And they set a new record with their 7-0 hammering of Basel in the Round of 16 at the Allianz Arena.

History favors the Germans as the clubs have met in four previous European Cup semi-finals with Bayern prevailing three times (in 1976, 1987 and 2001) to Madrid's single success in 2000.

Goalkeeper Iker Casillas is the only survivor of the most recent clashes.

Bayern have an impeccable home record in this European campaign and boast an overall unbeaten record at home against Madrid with eight wins and one draw over the years.

"We will pull out all the stops and fight for both Champions League and the German Cup," said Mueller with Bayern to face Dortmund in the domestic cup final on May 12.

"There is no problem with motivation, we will do everything we can to reach the final."

France striker Karim Benzema and Argentina forward Angel di Maria are expected to make the Real starting line-up having begun on the bench against Sporting.

Likewise, Heynckes is expected to start with wingers Arjen Robben and Ribery firing crosses for Gomez, who has scored 39 goals in all competitions this season, including four in the rout of Basel.

The match pits Heynckes against Jose Mourinho, who engineered Bayern's downfall at the hands of Inter Milan in the 2010 final at Madrid's Bernabeu.

Between them the teams have 13 European Cups but both are hungry to add to their haul with Bayern, four-time winners, seeking a first title since 2001 and Madrid their first since 2002 and a record 10th overall.

Bayern hold the upper hand with 10 wins to Madrid's six from the clubs' 18 past matches.

The most recent meeting came in the 2006-07 Round of 16 when Bayern prevailed on away goals, losing 3-2 in Spain, but winning the return leg 2-1 in Munich.