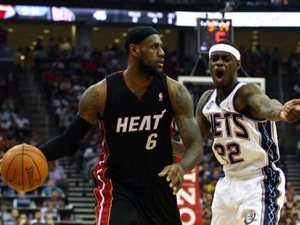 As a result, the Heat closed the gap on Chicago in the fight for the best overall record in the Eastern Conference and a home-court playoff advantage into the NBA Finals, Miami improving to 43-17 while the Bulls fell to 46-15.

The Heat play host to Chicago on Thursday in what figures to be a critical showdown to decide which of them will be the overall top seed in the East for the playoffs, which begin on April 28.

Chicago played without reigning NBA Most Valuable Player Derrick Rose, who missed his 24th game of the lockout-shortened season with a sore right foot, and Britain's Luol Deng, who has a right rib injury.

Miami was missing star guard Dwyane Wade, who was rested by the Heat, while the Nets lacked star Deron Williams, who was nursing an injured right calf.

At Chicago, a James Singleton dunk gave the Wizards an 82-77 lead with 1:40 remaining but C.J. Watson answered with a jumper for the Bulls. John Wall hit one free throw but Watson sank another jumper to pull Chicago within 83-81.

Two more Wall free throws with 22 seconds remaining gave Washington an 85-81 edge but Watson responded with a 3-pointer with 16 seconds to play to pull Chicago within 85-84 before the Wizards added two Maurice Evans free throws to produce the final margin.

Watson and Richard Hamilton missed 3-point shots in the final five seconds and the Wizards hung on for the upset victory, improving to 15-46, the NBA's second-worst record, with their first win in Chicago since 2008.

At New Jersey, LeBron James scored eight of his game-high 37 points in the last 90 seconds to rally the Heat. Cris Bosh added 22 points and 15 rebounds.

The Nets led 96-93 before James scored eight points in a row down the stretch to seize a victory.

A James layup pulled Miami within 96-95 and another after a Gerald Green miss for the Nets put the Heat ahead to stay with 51 seconds remaining.

James hit an inside jumper with 13 seconds remaining for a 99-96 Miami lead and, after a Nets turnover, he hit two free throws to give Miami a five-point cushion.

MarShon Brooks hit a jumper for the Nets with .4 of a second remaining but it was too little and too late to keep New Jersey, already eliminated from playoff contention, from falling to 22-40.