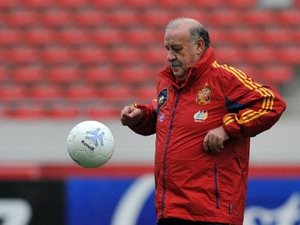 Vicente del Bosque revealed on Tuesday that he has renewed his contract as Spain coach, which could see him remain in the post until the 2014 World Cup in Brazil.

His contract had been due to expire after Euro 2012, which runs from June 8 to July 1 in Poland and the Ukraine.

The former Real Madrid coach, who led Spain to glory at the 2010 World Cup in South Africa, did not disclose the length of his new contract but contracts with the Spanish Football Federation tend to have durations of two years.

Spain will begin their Euro 2012 campaign as favorites to retain the trophy they won in Austria and Switzerland in 2008, but Del Bosque said: "I don't subscribe to the theory that not winning the Euro would be a failure."

He said he was "very optimistic" about the return to fitness of Barcelona striker David Villa, who fractured his left tibia during the FIFA Club World Cup in December.

Spain were drawn in Group C, alongside Italy, Croatia, and the Republic of Ireland.