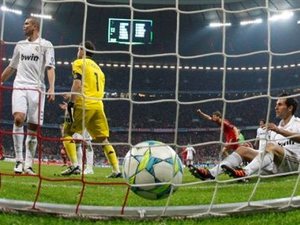 Real Madrid coach Jose Mourinho has insisted the Spanish giants can turn things around in the return leg despite losing 2-1 at Bayern Munich in the Champions League semifinal.

Germany striker Mario Gomez hit an 88th-minute winner in Tuesday night's first leg to put Bayern in pole position to reach the May 19 final at their own Allianz Arena stadium against either holders Barcelona or Chelsea.

After France winger Franck Ribery gave Bayern an early lead, Real's Mesut Ozil equalized before Gomez's winning strike, but Mourinho says his team can hit back at their Bernabeu stadium in next Wednesday's return leg.

"We have the second leg to come and it's not like we have to make a historical comeback, what we have to do is very achievable," said Mourinho, whose team are away to Barcelona in El Clasico on Saturday in the Spanish league.

"I am optimistic we can return here to play in the final.

"I think a more justified result would have been a draw, but that's football.

"Whoever scores goals wins games, simple as that.

"It's not a bad result, it just means we have to win at home and turn it around.

"It wouldn't be the biggest turn around in history, I still think the team can do it, the fans will be behind us, just like the fans helped Bayern.

"We will prepare after Saturday's game and the team will be ready.

"Real always plays to win and I would have liked to have won today."

Mourinho said English referee Howard Webb had made a mistake in awarding Bayern's opening goal as replays showed Ribery fired home with a Bayern player offside, but he refused to criticize the official.

"We had the feeling that one team could get through with a lucky punch and they made it," said Mourinho.

"Their first goal was offside, that is clear.

"I accept the referee's decision, but he shouldn't have given the goal."

Bayern coach Jupp Heynckes was delighted with his team's performance as they preserved their remarkable record of having never lost at home to Madrid, with nine wins and a draw in their 10 meetings in Munich since 1976.

"I had said we would play with passion for 90 minutes and the players did just that, they gave their all.

"I must pay a great compliment to my team, they ran very hard and played a great game."

Heynckes also singled out match-winner Gomez for his tireless display.

"He worked hard for the 90 minutes and won back several balls we had lost and he deserved to get the winner," said Heynckes.

With all still to play for in Madrid, Heynckes said his team will not play for the draw.

"No, we don't have to produce a defensive display," he said.

"I don't know my tactics yet, but Bayern Munich will play to their style.

"We will play to make chances and we are capable of creating a few goals, I won't be thinking defensively, you have to balance well in defense and attack.

"The defense wasn't that organized for their goal, but we will play for a win in Madrid and we will not play for the draw."