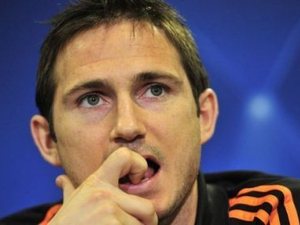 Chelsea believe they can stymie the jaw-dropping goalscoring exploits of Lionel Messi and pull off an unlikely upset against Barcelona in the Champions League semifinals Wednesday.

Messi took his season's tally to an astonishing 63 goals in 52 games at the weekend with a double strike in Barcelona's win over Levante, leaving him just four shy of Gerd Muller's all-time single-season European record of 67.

Another goal at Stamford Bridge would see the Argentinian set a new benchmark for goals in a single Champions League campaign, taking him past the record he currently shares with Jose Altafini, who scored 14 for AC Milan in 1962-63.

Referring to Messi's ongoing scoring duel with Real Madrid's Cristiano Ronaldo, Barcelona coach Pep Guardiola said recently that the two players were "eating at a separate table to the rest."

The challenge for Chelsea on Wednesday is finding a way to prevent Messi from treating the English club's ageing back four as an all-you-can-eat buffet.

Yet Chelsea's elder statesmen -- almost certainly featuring together in a Champions League campaign for the last time -- are refusing to be cowed by Messi and Barcelona's reputation as one of the best teams of all time.

"From the start of every game, it's 50-50," Chelsea veteran Frank Lampard said. "We are in the Champions League semifinal on merit. We can't show too much fear against them. We have to respect them but also take them on and play the way we play.

"When I watch Barcelona I expect them to win but you have to believe in yourselves. We have given them tough games in the past and we are ready to try to do that again."

Nevertheless Lampard is under no illusions about the scale of the task in front of Chelsea, who come into the game with useful momentum following the 5-1 FA Cup semifinal thrashing of Tottenham at Wembley.

"He has improved since we played them in 2009 and he was a fantastic player then. The levels he has taken his game to is something I have never seen before," Lampard said.

"I grew up on Maradona. He was my idol and I think Messi has taken it to higher levels than him. To get close to 70 goals is crazy. He deserves it. He is the best player in the world."

Chelsea's last meeting with Barcelona came in the semi-finals three years ago, when Andres Iniesta's injury-time equalizer and a string of dubious refereeing decisions denied the English side a place in the final.

Lampard said Chelsea would not be entering the match motivated by a sense of revenge. "That's not really in our thoughts," Lampard said. "They have moved on from three years ago and we have changed as well."

Chelsea's interim manager Roberto Di Matteo is likely to target Barcelona's back four as he attempts to mastermind what would be the greatest win since he took over from the sacked Andre Villas-Boas in March.

Di Matteo is adamant that there are weak links in Barcelona's armor. "We just need to exploit them,” he said.

"You look at the way you can hurt Barcelona and create them difficulties. I've seen many games."

Di Matteo was also wary of obsessing about the threat posed by Messi,

"It's not just about stopping a single player, because obviously they have so many players that can hurt you," he cautioned. "It has to be a team tactic, a team strategy, to be able to limit their threat."

Barcelona coach Guardiola meanwhile says he is unfazed by the prospect of a physical approach from Chelsea.

"Am I worried by Chelsea's physical approach? No, I'm not worried," Guardiola said. "I'm used to it.

"We have the mentality to control this situation. It's very important to have this mentality."

Go Chelsea you can make it!! True Blue Forever!!