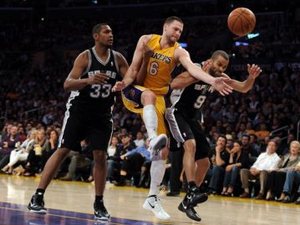 Tony Parker scored 29 points and added 13 assists to spark San Antonio past the Los Angeles Lakers 112-91, lifting the Spurs to the best record in the NBA's Western Conference.

Tim Duncan contributed 19 points while Argentina's Manu Ginobili added 15 as the Spurs won for the 18th time in their past 21 games, improving to 44-16 to edge past Oklahoma City, 44-17, for the top spot in the West.

Only the Chicago Bulls, with an NBA-best 46-15 record, have a better mark than the Spurs in the fight for the overall home-court advantage in the NBA playoffs, which begin April 28.

Six days after the Lakers routed the Spurs 98-84 in San Antonio, the Spurs inflicted the most lopsided home defeat upon the Lakers since March of 2007, when the Dallas Mavericks ripped Los Angeles 108-72.

"We were motivated," Parker said. "They beat us bad last time. We were on a mission. We moved the ball around well. We shot the ball well."

The Lakers played without star guard Kobe Bryant for the sixth game in a row because of a left shin injury, falling to 4-2 without him. Bryant has said he will be back in uniform before the regular season ends next week.

French playmaker Parker, who scored 19 points in the first half on 9-of-12 shooting and finished 14-of-20 from the field, heaped praise upon Duncan, who grabbed eight rebounds and helped ignite a key run late in the second quarter.

"Vintage Tim Duncan. He played a great game," Parker said. "If he keeps playing like that, I like our chances."

The Lakers fell to 39-23, snapping their four-game win streak and trimming their lead over the Los Angeles Clippers in the Pacific division to one-half game. Andrew Bynum led the Lakers in scoring with 21 points.

The turning point came late in the second quarter when the Spurs scored 18 points in a row, aided by turnovers of five consecutive Laker possessions, as part of a 24-6 run over the final five minutes of the first half.

The Spurs led 63-47 at half-time, took a 91-70 edge into the fourth quarter and stretched their lead to as many as 24 points in the second half, denying any hope of a late comeback bid by the Lakers.