Djokovic and Nadal into Third Round at Monte Carlo 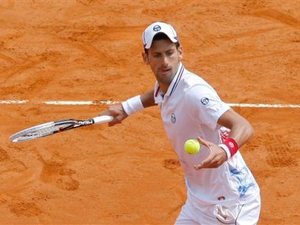 Seven-time defending champion Rafael Nadal and top-ranked Novak Djokovic got their clay-court seasons off to a good start with comfortable wins in the second round of the Monte Carlo Masters on Wednesday.

Djokovic opened with a 6-1, 6-4 win against Andreas Seppi of Italy and his archrival Nadal followed up by beating Jarkko Nieminen of Finland 6-4, 6-3.

Nadal looked a bit rusty at times after not playing a match for three weeks to rest and treat his troublesome left knee.

He broke Nieminen's serve four times, and had the match closed for him when the Finn double-faulted.

The Spaniard, who has not won a title since last year's French Open and has lost seven straight tournament finals to Djokovic, next plays Kazakhstan's Mikhail Kukushkin.

Djokovic raced into a 4-0 lead after 19 minutes before Seppi started to fight back. Djokovic ultimately improved to 7-0 against the Italian.

"I haven't played a match on a clay court since Roland Garros last year, so I'm happy with how I played," Djokovic said.

The Australian Open champion next faces Alexandr Dolgopolov of Ukraine, who had 11 aces in his 6-2, 5-7, 6-1 win against Australian Bernard Tomic.

"He's a very talented player and has a lot of variety in his game, so it will be very difficult," Djokovic said.

Djokovic looked on course for an even easier win after the early double break put him in total control.

But in a long fifth game lasting 11 minutes, the Serb was finally tested as Seppi showed some form with a couple of big forehands and one lovely drop shot. Djokovic even had to save two break points at 15-40.

Targeting Djokovic's backhand, Seppi then won a long rally to force another break point, then wasted it with a hurried forehand into the net.

After another long sixth game, Seppi drew a cheer from the crowd after finally holding his serve. Djokovic quickly wrapped up the set when Seppi returned his second serve into the net.

Both players held at the start of the second set before Djokovic stepped up the pace by breaking Seppi to love.

Sixth-seeded Tomas Berdych of the Czech Republic, No. 7 Janko Tipsarevic of Serbia, and No. 8 Nicolas Almagro of Spain also won in straight sets.

Frenchman Julien Benneteau will play Andy Murray in the third round after beating Jurgen Melzer of Austria 6-4, 6-3.