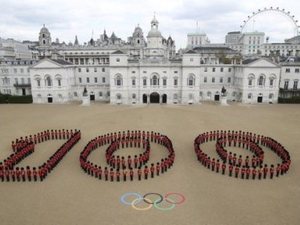 London Olympic organizers said there is now a real buzz about the 2012 Games as they started the 100-day countdown on Wednesday by unveiling its 'Inspire a generation' motto.

The milestone was marked by events in Britain and around the world as London chiefs said they were looking in "great shape" before the sports extravaganza kicks off.

He spoke at the Royal Botanic Gardens in Kew, southwest London, where 20,000 flowers planted in the shape and colors of the five Olympic rings are visible from planes flying into London Heathrow Airport.

The motto, Coe explained, was aimed at London's promises that its Games would leave a genuine, lasting legacy.

"It is everything we have been saying since we started this extraordinary journey," he said.

"It's the heartbeat, the very DNA of this organization and a rallying cry for the athletes to come to the UK to perform at their very best and inspire the world."

The milestone was marked by events in Istanbul, Caracas, Miami, Wellington, Berlin, Sarajevo, St. Petersburg, 2014 Winter Olympics host Sochi, in the Palestinian Territories, and the United Nations in New York.

In Miami, 1990 heavyweight boxing gold medalist Lennox Lewis led a community bike ride while, at the United Nations, past and present Olympians watched children's races in front of the U.N. headquarters.

"You are all invited to London -- but I can't promise any tickets," said Britain's U.N. Ambassador Mark Lyall Grant.

Coe added earlier: "I have rarely witnessed the level of excitement... amongst the elite-level competitors that are going to come and dignify our Games in 100 days' time."

The 15,000 Olympic and Paralympic athletes are "inching their way to the biggest moment in their lives", he said, adding that London would not let them down.

Coe said he was "very confident" that the city was in "great shape" to host the Olympics.

Amid the all-round air of optimism, Paul Deighton, the London Games chief executive, stressed that there was still an "enormous amount to do", with several temporary venues to be completed. Some 200,000 temporary seats are yet to go in.

"When it come to the risk of complacency, I can assure you that in life these days, only the paranoid succeed," Deighton added.

Some 31 out of 42 sports test events have been completed, with dress rehearsals for wheelchair rugby, synchronized swimming, and shooting all getting under way on Wednesday.

Queen Elizabeth II will open the Games at the Olympic Stadium in Stratford, east London, on July 27.

Organizers accept they cannot match the spectacle or budget provided by the 2008 Beijing Olympics.

But they hope the showpiece ceremonies will bring together the country's most creative minds to produce a memorable celebration of Britishness.

Britain hopes the Games will give the ailing economy a much-needed boost. Despite public spending cuts, the £9.3 billion ($14.8bn, 11.2bn euro) budget has remained intact.

"The right time to ask people whether they think it's worth it is going to be after the event," said Culture and Olympics Secretary Jeremy Hunt.

"The country is getting ready to welcome the world this summer and it's set to be an amazing celebration that we will never forget."

Despite the organizers’ confidence, doubts remain about how London's congested transport system will cope.

Security issues have also cast a shadow since the day after London won the Games hosting rights on July 6, 2005, when suicide bombers killed 52 people on the public transport system.

More than 40,000 soldiers, police and private security guards will be mobilised during the event.

Stressing that the threat of attacks was nothing new to London, sports minister Hugh Robertson said: "I'm absolutely as confident as I possibly can be 100 days out that we will deliver a safe and secure Games."