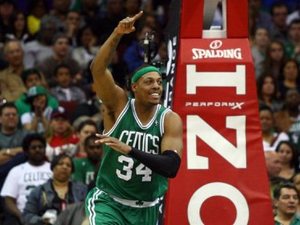 Pierce, who also handed out a career-high 14 assists, helped the Celtics overcome the absence of Rajon Rondo, who was still nursing a sore back after a spill in the defeat at New York on Tuesday.

Boston turned back a late surge by the playoff-bound Magic, who trailed by as many as 13 in the fourth quarter but whittled the deficit to one before the Celtics secured the win.

Orlando were without star Dwight Howard, who has a herniated disk in his back.

In his absence, former Celtic Glen Davis led the Magic with 23 points.

Eastern Conference leaders Chicago and their closest pursuers, Miami, both won Wednesday, warming up for their clash on Thursday.

The Bulls edged closer to clinching the top seed in the East with a 100-68 romp past lowly Charlotte.

The Bulls were without Most Valuable Player Derrick Rose, still feeling a sore right foot, and Luol Deng, who has bruised ribs.

Even so, Chicago led by as many as 24 points, shooting 52 percent while holding the Bobcats to 34 percent shooting.

Miami, who played without Dwyane Wade and Chris Bosh, relied on LeBron James in a 96-72 victory over Toronto.

James made 10 of his first 11 shots, finishing with 28 points and resting all of the fourth quarter as the Heat had the game in hand.

On Thursday Miami tackle the Bulls in a contest that will be crucial to the Heat's hopes of dislodging Chicago from the top spot in the East.

In the West, the Memphis Grizzlies clinched a playoff berth with a 103-91 victory over New Orleans.

Rudy Gay scored 26 points and Mike Conley added 20 for the Grizzlies, who also had Zach Randolph and O.J. Mayo combine for 25 points off the bench.