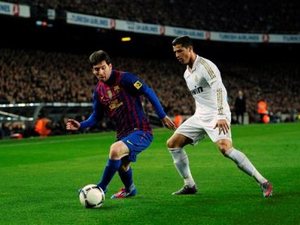 Lionel Messi and Cristiano Ronaldo's record goal-scoring form looms as the decisive factor when Spanish league leader Real Madrid plays at Barcelona on Saturday in a crucial "clasico" that will effectively determine the destiny of the title.

Madrid has seen a 10 point lead over three-time defending champion Barcelona whittled down to just four points over the past month, and a loss at the Camp Nou would see the advantage sliced to just one point with four more games remaining.

Madrid may be the hunted, but of the two teams, it is Barcelona that can least afford to lose. Coach Pep Guardiola, who has only lost once in 10 games against Madrid, said "if they win (the league) is over."

Ronaldo's 41st goal of the season — and 53rd overall — last weekend saw the Portugal forward surpass his record mark of 40 goals set last season. Messi, not to be outdone, scored a pair nearly two hours later to match Ronaldo and take his overall tally to 63, the best since Bayern Munich's Gerd Mueller scored 67 during the 1972-73 season.

Both players, and both teams, will be looking to recover from sub-par European performances in midweek. Real Madrid lost 2-1 at Bayern Munich while Barcelona was beaten 1-0 at Chelsea in the first legs of their Champions League semifinals.

In head-to-head duels dating to Ronaldo's time with Manchester United, Messi has scored seven goals to Ronaldo's five, while the Argentina forward has struck 10 goals in his past 14 meetings against Madrid.

Madrid can set a new mark for goals scored in a season by netting against its Catalan rival. Last weekend, Madrid matched its own record total of 107 goals scored during the 1989-90 season.

Jose Mourinho's tactics will be a key to the game. The Madrid coach may opt for a conservative approach knowing a draw will go a long way to securing the title. But that tactic has always failed against Barcelona in a series of ill-tempered and acrimonious games.

Mourinho opted for a defensive display in a 2-1 Copa del Rey loss in January that left him under pressure from a usually staunch section of supporters. In the return leg, Mourinho unleashed all of his talented forwards, including Kaka and Mesut Ozil, and Madrid was unlucky to only draw 2-2 in a rare match in which Barcelona was outplayed on its home ground.

Kaka did not feature in Wednesday's loss at Bayern, when Mourinho went conservative again. Madrid's trio of Ronaldo, Karim Benzema, and Gonzalo Higuain have combined for 107 goals in all competitions this season.

Both teams are expected to have fully fit squads available for a match that slips in between Champions League semifinals.

"The clasico will be very important but not definitive," Barcelona goalkeeper Victor Valdes said. "If we beat them we can't start believing we are champions."

Elsewhere in Spain, Racing Santander could become the first club to be relegated if it loses to Athletic Bilbao and both Granada and Villarreal win their games. That would also cause problems for second-bottom Sporting Gijon, which plays Rayo Vallecano.