Saniora after Meeting Hoss: STL Not Aimed at Revenge, Raad’s Statements are Political but under Legal Guise 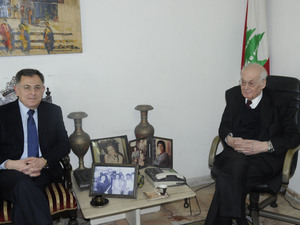 Former Prime Minister Fouad Saniora stressed on Saturday that the Special Tribunal for Lebanon is not seeking revenge or political gains, but it is aimed at achieving the Lebanese’ interest.

He said after holding talks with former premier Salim al-Hoss: “Claims that it is politicized are baseless.”

Responding to statements issued by the head of the Loyalty to the Resistance bloc MP Mohammad Raad that the tribunal is trying to achieve international goals, he stated: “We have grown accustomed to political statements issued under a legal and constitutional guise.”

Addressing the government formation process, Saniora noted: “Contrary to what has been said, it has now become clear that the obstacles did not lie in the March 14 camp’s failure to take a clear stand over the new government.”

Furthermore, Prime Minister-designate Najib Miqati should take “clear and honest” stands from the STL and Lebanon’s commitments to its international obligations, he added.