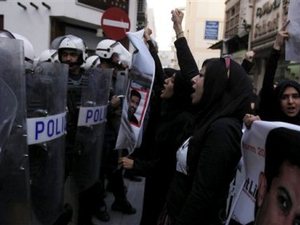 Two members of the Force India team have decided to leave Bahrain, including one person who was in a team vehicle that was briefly delayed by a firebomb a day earlier.

The bomb exploded Wednesday night in Bahrain's capital Manama, causing a Force India van with four team members to be delayed in traffic on its way from the Bahrain Grand Prix circuit back to its hotel. No one in the vehicle was hurt and none of the four passengers were Formula One drivers, Force India spokesman Will Hings told The Associated Press by telephone from Manama on Thursday.

"We were not the target. We just happened upon an incident that was ahead of us, a disruption in the road," Hings said. "Nobody was hurt from our team. We were not targeted directly by Molotov cocktails."

Hings said the four team members were back at the track on Thursday, but later told the AP that one of them was leaving the country and heading back to Europe. Hings said another member of the team who was not in the delayed vehicle was also leaving.

"I won't be giving any details of their positions or names ... they were just people working for the team," Hings said. "I can't give you any more information other than that they're returning home out of their free choice."

Demonstrators in Bahrain have increasingly used firebombs against security forces during the near daily clashes. But Hings declined to comment on whether the team was worried about safety.

"We've always taken out direction from the FIA, the sport's governing body. I'm sure they're continuing to monitor the situation in Bahrain," Hings said. "We take our guidance from them."

"During this incident a Molotov cocktail landed in the vicinity of their vehicle," the BIC said in a statement. "After approximately two minutes, the route was cleared and the vehicle carried on its journey."

The Bahrain GP was canceled last year due to anti-government protests that left nearly 50 dead. But last week, Formula One boss Bernie Ecclestone declared the Gulf kingdom safe and decided to go ahead with this year's race.

"The BIC would like to reiterate its confidence in the relevant Bahrain authorities in their ability to deal with such isolated incidents and can confirm that all the usual precautions are being taken around the track to ensure the level of security is maintained," the circuit said.

Also Wednesday, security forces fired stun grenades at anti-government protesters who swarmed into a cultural exhibition for the race, setting off street battles and sending visitors fleeing for cover. The demonstration was the most direct attempt by Shiite-led protesters to bring their demands for an end to the near monopoly on power by the island nation's Sunni monarchy into events linked to Sunday's race.

Although last year's race was called off because of the unrest in the country, organizers have insisted that this year's race will be safe, and blamed extremist groups using "scare-mongering tactics" for raising doubts about the race.

But protesters argue that the F1 decision to return to Bahrain gives greater international legitimacy to the monarchy and its crackdowns, which rights activists claim have included waves of arrests in the past week.

On the track, teams will be practicing Friday and Saturday before qualifying later Saturday. The race is scheduled for Sunday.