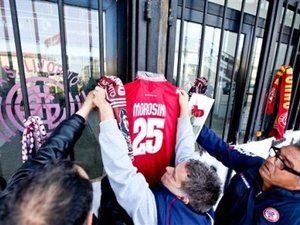 Thousands of fans filled the streets of Bergamo to on Thursday for the funeral of Piermario Morosini, an Italian footballer who collapsed and died during a Livorno match last weekend.

About 600 people packed into the Church of San Gregorio Barbarigo for the service, while thousands watched on big screens outside.

Morosini's coffin was draped in his Livorno shirt as well as an Atalanta top bearing his name and the No. 8. Adorned with wreaths and flowers, it was also covered by several football scarves. Next to the coffin had been placed boots and footballs.

"Mario is really in our hearts. I'm not scared and I am here not only for Mario but with Mario," father Luciano Manenti said at the start of the service.

Morosini, a 25-year-old midfielder who was on loan from Udinese, started out in Atalanta's youth team. The entire Atalanta squad was present at the funeral, as well as Udinese players and numerous former teammates, including an emotional Sulley Muntari.

"Faced with this tragedy, football has to ask itself questions," Prandelli said. "Sports medicine and prevention in Italy are cutting-edge but it can improve.

"Piermario has done the miracle of uniting all the banners which normally in every football game are one against the other. He taught us that you can face life's difficulties with a smile on your face always."

"We have lost a son and a brother," Vavassori's mother, Mariella, said. "The pain is great but we know that you don't want us to be sad but to smile, with that smile that always lit up your face.

"Goodbye Mario, we thank you for your presence in our life. You taught us so much, you made our hearts more true and loyal, free like you were. I thank you for giving so much love to our Anna."

Another of the chief mourners was Morosini's elderly aunt and his elder sister Maria Carla, two of his few remaining family members. Morosini's mother died when he was 15 and his father died two years later. His brother died shortly afterward, too.

Udinese has set up a fund for Maria Carla, who is disabled and relied on her brother for financial support.

Morosini's coffin was carried out at the end of the service to lengthy applause and chants of his name, while several fans also lit flares.