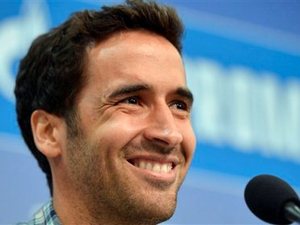 Spanish veteran striker Raul Gonzalez will leave Bundesliga club Schalke at the end of the season and move outside Europe when his two-year contract expires.

Raul, who turns 35 in June, said Thursday he had two offers from outside Europe but did not specify.

"My playing future is not in Europe," Raul said, adding that the league he picks will not be as strong as European leagues.

Schalke had made the former Real Madrid and Spain captain an offer to stay but the club said that he has decided to leave.

"They were two wonderful years that I will always bear in my heart. I was able to do what I like doing the best: playing, playing, playing," Raul said. "I also have to give the fans a special thanks for their affection and respect."

Schalke managing director Horst Heldt said Raul would get a farewell match in 2013, likely against a Spanish club, and that Schalke would retire his No. 7 jersey for the time being.

Schalke chairman Clemens Toennies said Raul had given Schalke a "piece of glamor" and praised his commitment.

Raul established himself as a fan favorite after joining Schalke last season. He has scored 27 goals in 63 Bundesliga appearances.

He won the German Cup and reached the semifinals of the Champions League in his first season with Schalke.

The club is third in the top division with three games left to play and on course for a Champions League place next season.