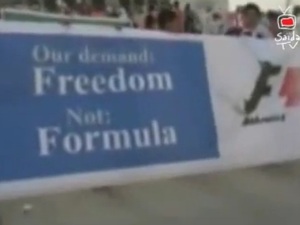 Violence marred Bahrain's controversial Grand Prix race as a firebomb exploded near Force India team members and protesters clashed with police in the lead-up to the Formula One practice runs set to begin on Friday.

The incident prompted F1 officials to reassure participants that despite the violence, Bahrain was safe.

Speaking to reporters at the Sakhir circuit, chairman of the Formula One Grand Prix Drivers Association, Pedro de la Rosa, said safety is "not a concern," adding that he had full faith in the decision by the International Motoring Federation to hold the event despite mounting tensions in the kingdom.

Four members of the Force India team were stuck in traffic when a firebomb exploded as they returned from the Sakhir circuit to their hotel late on Wednesday, Bahrain International Circuit chairman Zayed R Alzayani told Autosport magazine.

Nobody was injured, but one member of the team, based at Silverstone in England, decided afterwards to leave Bahrain and return home.

The four mechanics apparently got caught up in a clash between protesters and police on the main motorway from the capital Manama to Sakhir.

Alzayani played down the matter, and said he would not request any tighter security as a result.

"It was an isolated incident... The protestors were not targeting the cars, they just happened to be there," he said.

Force India driver German Nico Hulkenberg said it was "not right" that members of his team had been close to an exploding firebomb, but added that he still felt safe.

Bahrain's main opposition group, Al-Wefaq, has called for a week of daily protests to coincide with the Grand Prix, using the sports event to focus media attention on their long-standing demands for greater equality and representation in the Sunni-ruled kingdom.

"There is a desire to take advantage of the presence of (international) press, normally barred from entering the country," said Bahraini rights activist Nabil Rajab.

"The Formula One... is a symbol of the regime, it represents its repression," said Rajab, noting that the Bahrain race is a personal project of the Crown Prince.

The government on Thursday barred Al-Wefaq from holding a protest in central Manama, an interior ministry statement said.

The announcement came in the wake of several demonstrations in Bahrain's Shiite villages late on Wednesday, in which police and protesters clashed.

The violent clashes followed calls by the February 14 Youth Movement on social networking sites for "three days of rage" to coincide with the kingdom's controversial hosting of motor racing's premier event.

Hundreds of protesters gathered at the entrances to Shiite villages around Manama shouting anti-government slogans such as: "The people want the fall of the regime," and "Down Hamad," in reference to Bahrain's king.

Iraqi Shiite cleric Moqtada al-Sadr meanwhile called for a boycott of the race over the kingdom's continued crackdown on dissidents.

"I call on all honest sportsmen not to participate in that race ... and to support the Bahraini people in their rejection of holding this race," the cleric, who heads the powerful Sadr movement, said in a statement released by his office in the Shiite holy city of Najaf.

"Holding the race in that country supports killing, oppression and the violation of the Bahrain people's freedom," the anti-American cleric, said.

Security has been beefed up in Bahrain ahead of Sunday's race, criticized by human rights groups.

Earlier this week, hundreds of protesters marched carrying banners calling for a boycott and a demonstration was held near Bahrain's international airport as the teams began arriving, despite the arrest of about 80 leading democracy activists.

The Bahrain Grand Prix was cancelled last year in the wake of the Shiite-led uprising and the brutal government crackdown that followed in which 35 people were killed, according to an independent commission of inquiry.

In mid-February 2011, thousands of Shiite-led pro-democracy activists, inspired by the revolutions of the Arab Spring in Egypt and Tunisia, poured onto the streets of Manama, demanding democratic change.