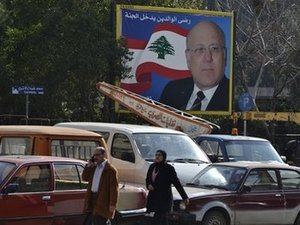 Political circles monitoring the government formation process revealed that three obstacles are hindering the formation of the new Cabinet.

They told the Kuwaiti al-Anbaa newspaper that the first of these obstacles is Free Patriotic Movement leader MP Michel Aoun’s insistence on acquiring the interior ministry portfolio from President Michel Suleiman.

The second obstacle lies in granting ministers a blocking minority.

The dispute is not in granting the power, but to whom it is given as some sides support handing it to Miqati and Suleiman, while some March 8 camp sides are demanding that it should be granted to Miqati, Suleiman, and Progressive Socialist Party leader MP Walid Jumblat.

The third obstacle lies in the premier-designate’s refusal to agree on a certain portfolio without reaching an agreement on who would handle it.

The circles said that the role the indictment in the investigation in the assassination of former Prime Minister Rafik Hariri should not be overlooked at this time, adding that no one knows its contents and when it will be issued.

It should be taken into consideration that its release will affect the government formation process, they said.

On this note, a widely informed source told the Syrian al-Watan newspaper in remarks published on Sunday that the general impression is that the government consultations have reached a negative phase of stalling given the numerous local and external factors that are hindering its formation, one of which may be the indictment.

It stated that the government still needs more time to be formed, predicting that it may be formed by the end of March.