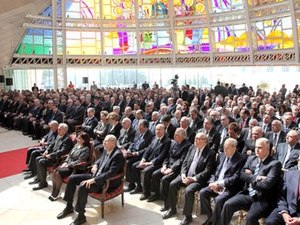 The ceremony was marked by the withdrawal of FPM ministers Jebran Bassil and Fadi Abboud, as well as MP Alain Aoun, because Lebanese Forces leader Samir Geagea was seated in the front row along with ministers from his bloc.

They withdrew because Geagea is “neither minister nor MP”, reported the daily An Nahar on Sunday.

Minister Youssef Saadeh, from Marada Movement MP Suleiman Franjieh’s bloc, also withdrew from the ceremony in objection to the breach in protocol, but he did attend the mass that was held as part of the ceremony.

Parliamentary sources commented that Bassil, Abboud, and Saadeh are not MPs and their seats at the event were similar to their positions at the government table.

The ceremony was also marked for House Speaker Nabih Berri’s participation in his first visit to Bkirki since September 24, 2007, when he was conducting consultations over the presidential election.

They said that the Pope’s representative had relayed to Miqati Pope Benedict XVI’s interest in Lebanon’s stability, inquiring about the results of his consultations over the formation of a new government.