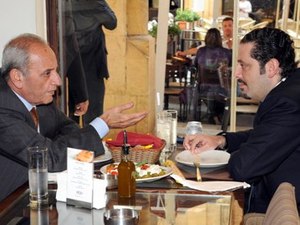 House Speaker Nabih Berri’s sources revealed to the Kuwaiti al-Anbaa newspaper that he is preparing a decisive response to Caretaker Prime Minister Saad Hariri’s recent speech, noting that the speaker “no longer cares” that the ties between him and the premier have reached one of their worst points.

The paper also reported sources close to the March 8 camp as saying that Hizbullah “will not take a risk in any confrontation between it and Hariri that would harm the party’s new allies.”

“It will not be dragged into one even if Hariri talks about Hizbullah’s arms day and night,” they added.

Hariri had recently announced during a speech that he is “no longer prepared to protect the Resistance after it has turned its weapons against the Lebanese.”

The caretaker PM is currently on a trip to Saudi Arabia where he met Interior Minister Prince Nayef bin Abdul Aziz al-Saud and Emir of the Riyadh region Prince Salman bin Abdul Aziz on Saturday.

The talks focused on bilateral ties and issues of mutual interest.

An Nahar daily reported on Sunday that Hariri’s contacts reflected the Kingdom’s ongoing and complete support for Lebanon.