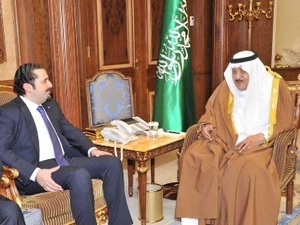 The talks focused on bilateral ties and issues of joint interest.

Beirut media reports stated that ties between Hariri and the Saudi minister’s family, especially his son Mohammad bin Nayef, had been tense recently after a statement Hariri made to the international investigation looking into the assassination of his father, former Prime Minister Rafik Hariri, was made public.