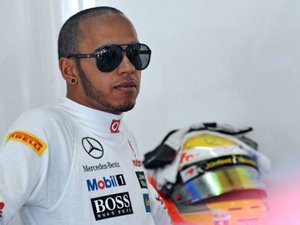 The 27-year-old Englishman clocked a best time of 1min 33.572secs to dominate the session ahead of his nearest rival, defending champion Sebastian Vettel of Red Bull.

The session was run in warm and dry conditions under a perfect blue sky at the Sakhir circuit in the desert landscape half an hour's drive from capital city Manama.

More importantly, for the Formula One paddock regulars, there were no further reported overnight incidents following the explosion of a firebomb close to a car carrying four members of the Force India team on Wednesday evening.

F1 chief executive and commercial ringmaster Bernie Ecclestone was sighted in the paddock, making a deliberate visit to the Force India team whose young British driver Paul Di Resta was third fastest in the session.

The Force India team spent the morning as the only team running on the soft compound tyres, a signal, many observers suggested, that they were unlikely to run through the second session in the afternoon because they intended to leave the circuit and return to their hotel before dark.

The shock of the firebomb incident on the motorway, when protesters clashed with police and brought the traffic to a halt on Wednesday evening, had upset many of the team.

Both of the Force India drivers were stoical about events around them.

Hulkenberg said: "We shouldn't have been put in this position," while Di Resta admitted it was an "uncomfortable situation".