Fergie 'Has a Word' With Young over Diving Storm 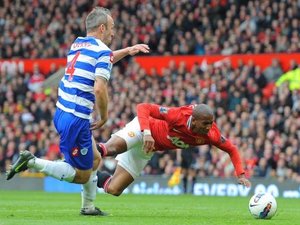 Sir Alex Ferguson has spoken to Ashley Young about his alleged diving in the wake of the controversy that has surrounded the Manchester United winger this week.

Young won a controversial penalty against Aston Villa's Ciaran Clark last week, the opening goal in a 4-0 victory that kept United in first place in the Premier League and on course for a 20th league title.

It followed a similarly debatable penalty decision won by Young in a win over QPR a week earlier and the United player's ability to stay on his feet -- or not -- in the opposition penalty area has become a subject of national debate.

Ferguson concedes that Young went to ground too easily in the Villa incident although he insists the infringement did deserve a penalty and has revealed that he has spoken with his player about his behavior.

"I've had a word with Ashley. He understands where we come from and hopefully it makes a difference," said Ferguson.

"The first thing you have to say about last week's incident is that if the player doesn't bring him down he's going to score. It's a clear goal-scoring opportunity. He caught him, though he did overdo the attempt to get a penalty kick. I'm not sure he actually tried to get a penalty kick but he certainly went down quickly."

However, given criticism in the wake of the two Champions League semi-finals in midweek - especially the behavior of Chelsea's Didier Drogba - Ferguson does believe that diving is an unavoidable evil in the modern game.

"In the context of what's happened the last few games - I watched Real Madrid-Bayern Munich the other night and it was absolutely ridiculous," said Ferguson.

"All the diving going about, nothing approaching what Young's been accused of, no doubt about it. And you see the other night in the Chelsea game, I think we're in an age when you almost expect it now."

Critics and supporters of Young alike have pointed out that the winger now runs the risk of being branded a "diver" and possibly failing to earn legitimate penalty decisions in future because of that reputation.

However, his manager hopes that Young is treated fairly by officials in coming weeks.

"We got a penalty kick against us against Newcastle that was never a penalty kick and an apology from (referees' official) Mike Riley, we didn't scream from the rooftops about it. It happens.

The debate about penalty decisions has also spotlighted the fact that players feel they must go to ground in the modern game in order to win the spot kick, a disincentive for attackers to remain on their feet.

"We have a player who's done that and he's been here 20 years," said Ferguson.

"How many penalty kicks has Ryan Giggs got for Man United? That's a good question. He has had five in 20 years, there's some record. You know why? Because his balance is so good, he never goes down. It's amazing to think about it."

Ferguson also confirmed that midfielders Paul Pogba and Anderson will not play again this season due to injury but that reserve forward Michael Owen will be in contention for a place on the bench after this Sunday's home game against Everton.