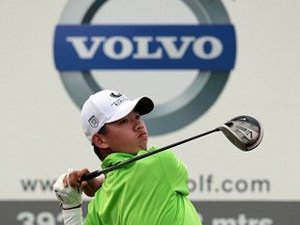 Chinese prodigy Guan Tianlang, 13, missed out on becoming the youngest player to make the cut in a European Tour event when he finished 12 over par after 36 holes at the Volvo China Open on Friday.

The Guangzhou schoolboy followed up his first round five-over-par 77 with a 79 at par-72 Tianjin Binhai Lake Golf Club. Guan was tied 150th out of 155 players in the $3 million event co-sanctioned by OneAsia.

Guan had already made history just by teeing off in Tianjin at the age of 13 years and 177 days. The youngest cut-maker on the European Tour is Jason Hak, who reached the weekend at the 2008 Hong Kong Open aged 14 years and 304 days.

The story of the slight Guan, who started playing aged four and won the world junior title by 11 shots last year in San Diego, has outshone some of the big names taking part in Tianjin including Ian Poulter and Paul Casey.

Guan, who also has hopes of reaching this year's U.S. Open through qualifying, received a last-minute entry to the tournament via the China Golf Association.

After two rounds England's Gary Boyd and Jean-Baptiste Gonnet of France shared the lead with 11-under-par totals of 133.

Poulter closed with birdie, birdie for a 71, scraping over the cut by a single shot, and Colin Montgomerie was seven strokes off the lead. But Casey, who has struggled with injury, missed the cut at three-over-par 147.