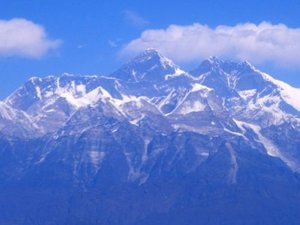 A 30-year-old Nepali mountaineer died on Saturday attempting to scale Mount Everest, a government official said, in the second death this season on the world's highest peak.

Namgya Tshering Sherpa fell into a deep crevasse while climbing towards Base Camp Two, more than two-thirds of the way up the 8,848-metre (29,029-foot) mountain, said Gyanendra Kumar Shrestha of the Nepal Tourism Board.

"He slipped from the snow and fell 40 meters into the crevasse. His body has been recovered near Camp Two, which is located at a height of 6,500 meters," Shrestha told Agence France Presse.

Namgya grew up in the shadow of Everest and conquered the peak in 2010 and 2011.

He was part of the support team for an expedition of mountaineers from the Netherlands, Canada, Ecuador and Norway, said trek organizer Roshan Sharma Bhattarai.

More than 3,000 people have climbed Everest, which straddles Nepal and China, since it was first conquered by Edmund Hillary and Tenzing Norgay in 1953 and every year hundreds more set out in April to attempt the climb.

Around 300 people have died trying to reach the summit.

On Wednesday, the son of fabled Everest climber Ang Rita Sherpa was killed by suspected altitude sickness while attempting to scale the mountain.