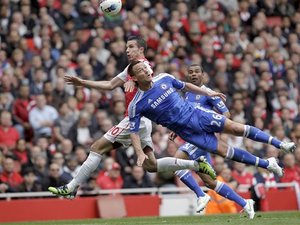 Chelsea missed the opportunity to break into the top four of the Premier League on Saturday after grinding out a 0-0 draw with third-placed Arsenal at the Emirates.

With Chelsea facing a daunting Champions League trip to Barcelona next week, manager Roberto Di Matteo rang the changes by naming only three members of the side that had beaten the Spaniards 1-0 in Wednesday's first leg.

The makeshift Chelsea line-up was able to keep Arsenal at bay for long periods as the Gunners were frustrated in their efforts to tighten their grip on an automatic Champions League qualifying berth.

Chelsea could have leapfrogged over Spurs and Newcastle into fourth but the result left the Blues in sixth place, one point outside the top four.

Di Matteo's men had rode their luck in a first-half where Arsenal were unlucky not to take the lead after twice hitting the woodwork.

Robin Van Persie saw his shot bounce back off an upright after a curling free-kick from Theo Walcott and Laurent Koscielny's glancing header hit the bar three minutes before half-time.

In the closing seconds of the half Van Persie threatened again, latching on to Alex Song's lofted pass and volleying straight at Petr Cech.

At the other end, Chelsea had strong appeals for a penalty rejected after Salomon Kalou was brought down in the area.

The second half saw Arsenal look the more threatening but Chelsea's sterling defensive effort kept the Gunners at bay.