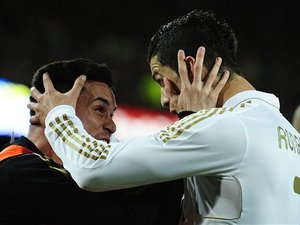 Cristiano Ronaldo grabbed his 54th goal of the season as Real Madrid moved closer to a 32nd La Liga title with a 2-1 win at Barcelona for whom Lionel Messi was reduced to a bit-part role.

"It was an important goal but the win for the team is more important, we have four matches left and with the seven-point gap (over Barcelona) we are in a comfortable position," said Ronaldo.

Ronaldo finished a Mesut Ozil pass from a tight angle on 73 minutes after rounding Victor Valdes in the Barca goal.

Sami Khedira had put Madrid ahead before substitute Alexis Sanchez leveled for Barca to give the Nou Camp faithful -- who had seen their champions crush their bitter rivals 5-1 in the same fixture last year -- a degree of hope.

The goal also means Ronaldo moves one ahead of Messi on 42 league goals in the battle to be 'pichichi', La Liga's top goal-scorer.

On the night, Ronaldo was far more dangerous than Messi, with six attempts at goal to Messi's one, a statistic which illustrated the Argentine's miserable evening.

"I am very happy," added Ronaldo. "I have scored now in the last three games here at Camp Nou, but the most important thing is the team and I congratulate my colleagues on their performance."

Madrid's two goals almost meant it was 109 for the season making them the highest-scoring team in a single season in Spanish football history, beating the record of 107 previously held by the Madrid side of the 1989-90 season.

"We are very happy to win in the Nou Camp and beat the goals record. Now we have to look to the Bayern game (on Wednesday in Champions League) in front of our own fans and we're very keen to get a good result," added Ronaldo.

Madrid trail 2-1 to the Germans in their semifinal ahead of the second leg.

Ronaldo's winner gave Madrid their first league win over Barcelona in four years and, barring a major stumble, ensured the title will return to the Santiago Bernabeu for the first time since 2008.

It will also end Barcelona's three-year grip on the title.

For coach Jose Mourinho, it was his first win at Camp Nou with Madrid and only his second triumph in 11 attempts against the Catalans.

Afterwards he continued his policy of not speaking to the press about league games but his assistant Aitor Karanka insisted there was still work to do.

"This match was not decisive in the league title race," said Karanka.

"There are still games and points to play for. Mourinho and the players are all happy, but we are also thinking now of the Champions League.

"Ronaldo has given us lots of fantastic moments. For me, he is the best player in the world."

"I congratulate Real Madrid for their victory and also for their league title which I have no doubt they have clinched tonight," said Guardiola.

"We played a good match, but it wasn't good enough. We played the kind of game that we needed to play but we just couldn't do it."

Guardiola also defended his decision to start the game with Gerard Pique and Cesc Fabregas on the bench.

"I selected the team which I thought had the best chance to defeat Madrid and, anyway, the losers are always wrong," he said. "Now we have to look to the future."

That was a reference to Tuesday's Champions League semifinal against Chelsea when the Spanish giants will attempt to overturn a 1-0 deficit from the first game at Stamford Bridge last week.

"Tonight, the players are sad, they are tired, but in their careers they have all faced similar situations and overcome them."

Madrid midfielder Xabi Alonso refused to believe that the title race was over.

"It's a very important result, but it hasn't decided anything," said Alonso.

"It is a big step towards the title. We need to finish it off. We controlled the match tonight and the result was fantastic.

"The key moment was Ronaldo's goal, it was the quick response to their equalizer."

Barcelona's Sergio Busquets admitted the game was almost up for his team.

"We are not in our best form at the moment, but we stayed true to our style of play," he said.

"We will keep battling but it'll be difficult."

barca will be allways the best te

this article is a copy paste from the saudi newspaper arriyadiyah.com