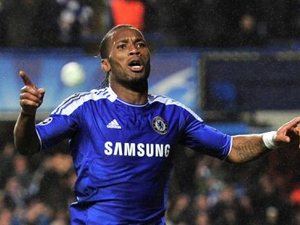 The Chelsea striker has a knee problem and was left out of the squad that held Arsenal to a 0-0 draw at the Emirates Stadium.

But after Drogba's match-winning goal in the Champions League semifinal first leg victory against Barcelona last week, Di Matteo is anxious to have the Ivorian back in his side for the Camp Nou return.

"We'll have to assess the players tomorrow. He has an injury on his knee, so it's whether the progression on this injury will be quick enough," the interim Chelsea first team coach said.

Di Matteo made eight changes for his side's third game in six days following the Barcelona clash and the FA Cup semifinal victory over Tottenham Hotspur.

"We're happy with the point away at the Emirates having played our third game in less than six days," he said.

"It was a brilliant performance from this team. It's a shame we missed the quality a bit in the final pass because we were in good positions sometimes.

"It wasn't really a question of resting players. It was about selecting a team that could win this game against Arsenal: three games in less than six days, two semi-finals and an away game at Arsenal, a crazy schedule.

"It wouldn't have been possible to play the same players again to win this game."

The draw meant Chelsea failed to take the opportunity to move into the top four.

But Di Matteo insisted: "I think it's a point gained for us towards that fourth spot."

And he added: "We have three home games and one away, so we'll hope to make up some points.

"It was always going to be difficult from the first day, qualifying for fourth place, but we're still in the running and we'll fight until the last day of the season to see if we can get in there."