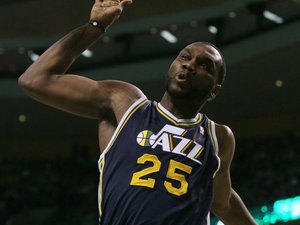 Devin Harris scored 21 points with seven assists and a crucial block on Saturday as the Utah Jazz downed Orlando 117-107 in over-time to boost their NBA playoff bid.

Al Jefferson also scored 21 points and grabbed 10 rebounds for Utah, who strengthened their hold on the eighth and final playoff spot in the Western Conference.

They are one game ahead of Phoenix and Houston.

Houston defeated Golden State 99-96 on Saturday while Phoenix suffered a damaging 118-107 defeat to Denver -- who clinched a playoff berth for the ninth straight season.

Ty Lawson starred for Denver, scoring a season-high 29 points that included making all five of his attempts from three-point range.

Denver are tied with reigning NBA champions Dallas for the sixth spot in the West with three games remaining.

The Jazz, meanwhile, will host the Suns on Tuesday, when a Utah victory would put the Jazz in the post-season for the first time since 2010.

A win for Phoenix would keep the Suns alive because they hold the playoff tiebreaker.

Jameer Nelson led the Magic with 23 points. Jason Richardson and Ryan Anderson scored 21 points apiece for Orlando, who are bound for the playoffs without star Dwight Howard -- who had season-ending back surgery on Friday.

Anderson's three-pointer put Orlando ahead 101-99 with 1:12 remaining in regulation.

Jefferson's jump shot tied the score with 21.4 seconds to play.

Nelson attempted a jump shot to win but Harris blocked the shot as time expired to send the contest into over-time, when the Jazz out-scored the Magic 16-6.