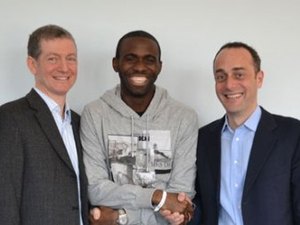 Bolton midfielder Fabrice Muamba has said he wants to play football again and thanked God for the "miracle" that allowed him to survive suffering a cardiac arrest on the pitch.

"It would be great to play football again and I hope that will happen. But it's even greater just to live life and love my family. I'm a lucky man," he told Britain's Sun on Sunday newspaper in his first interview since his collapse.

The 24-year-old was left fighting for his life after keeling over during the first half of Bolton's FA Cup quarter-final at Tottenham on March 17, which was subsequently abandoned.

Kinshasa-born Muamba's heart stopped for 78 minutes as medics battled to keep him alive at the stadium and then in the London Chest Hospital, but he has since made rapid progress and was discharged on April 16.

"I asked God to protect me -- and he didn't let me down," he told the newspaper. "What happened to me was really more than a miracle."

Describing the moment he collapsed, he said: "I could see Spurs players running around in the distance and saw two Scott Parkers then two Luka Modriches....

"I just felt myself falling through the air then felt two big thumps as my head hit the ground in front of me then that was it. Blackness, nothing. I was dead."