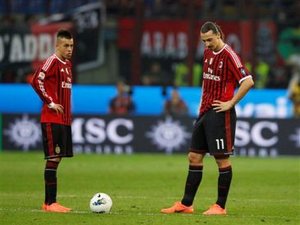 Juventus took control of the Serie A title race with a 4-0 victory over Roma on Sunday as AC Milan slipped up again in a 1-1 draw at home to Bologna.

It was Juve's sixth win in a row and opened up a three-point lead at the top with five games left.

They also have a better head-to-head record than the rossoneri meaning Milan need to make up four points to hold onto their scudetto crown.

Juve coach Antonio Conte said he doesn't even want to think about what Milan are doing.

"We have to look after our own affairs, we're ahead now and we're masters of our own destiny," he said.

"It's useless looking at the others and we'll keep going this way to the end."

Arturo Vidal scored a brace and Andrea Pirlo added the other as Juve killed the game before the half hour mark with Claudio Marchisio rounding off the scoring after the break.

Vidal arrived in the right place to finish from Paolo De Ceglie's cross on four minutes and the Chile midfielder hit an unstoppable shot from Mirko Vucinic's pass four minutes later to double the advantage.

Just before the half hour mark the game was over as Roma goalkeeper Maarten Stekelenburg was harshly judged to have brought down Marchisio in the box.

To add insult to injury he was sent off, even though there were two covering defenders and Marchisio, who seemed to hang his leg out to be caught by the keeper, had clearly lost the ball.

Substitute goalkeeper Gianluca Curci saved Pirlo's spot-kick but the Italy midfielder kept his cool to slot in the rebound.

Marchisio added the fourth with a precise low shot from outside the box.

Milan slipped up for the third time in four matches as Gaston Ramirez gave Bologna a first half lead and Daniele Bonera was sent off for the hosts 10 minutes from time before Zlatan Ibrahimovic rescued a point.

Ibrahimovic had what seemed a valid goal ruled out for a tight offside decision in the second half but Milan coach Massimiliano Allegri refused to make excuses.

"There's nothing to say, the linesman raised his flag, the referee gave Ibrahimovic offside," said Allegri.

Milan have only picked up five points from their last four league games and have only one win in six in all competitions.

The hosts fell behind on 26 minutes when indecision from Mark van Bommel saw Alessandro Diamanti break from the halfway line and slip in Ramirez to finish low into the corner.

Milan piled on the pressure after the break and Ibrahimovic seemed to have the ball in the net but was pulled back for a controversial offside.

Their task grew complicated 10 minutes from time when Bonera went through the back of Robert Acquafresca and picked up a second booking, leaving the champions to finish the game with 10 men.

But Ibrahimovic found the net a minute from time, tapping home a deep cross at the back post.

Lazio squandered the chance to exploit Udinese's 0-0 draw at Chievo on Saturday night as an injury time strike by Valeri Bojinov earned Lecce a 1-1 draw in the capital.

A group of home fans disgraced themselves with anti-semitic chants during the first half to make matters worse.

The third-placed Romans are now three points ahead of Udinese and four ahead of Napoli, who beat Novara 2-0 on Saturday, with five games to play in the race for Champions League football next season.

On a dramatic day, Genoa's clash at home to Siena was held up for 45 minutes as fans protested the hosts' performance -- they were 4-0 down at the time -- by throwing flares onto the pitch and climbing safety barriers.

With Genoa losing 4-1 in the end, Lecce are now just one point from safety