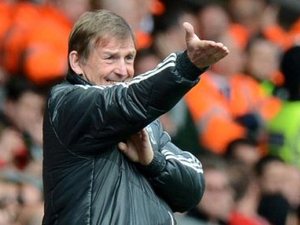 Liverpool manager Kenny Dalglish was left with a familiar feeling after seeing his side fail to take their chances in a 1-0 Premier League defeat at home to West Bromwich Albion.

Albion's Peter Odemwingie scored the only goal of Sunday's game 15 minutes from time to give the visitors a first win at Anfield 45 years to the day since their previous victory at the ground.

Liverpool's Dirk Kuyt and Jordan Henderson were both denied by the woodwork, Luis Suarez, and Andy Carroll had several chances while Maxi Rodriguez had a first-half penalty appeal rejected.

Liverpool have won just five times in 17 home matches this term and for Reds great Dalglish the days of 'fortress' Anfield he once knew so well must seem an awfully long while ago.

"It's not just been one of those days; it's been like that seven or eight times here," said the former Scotland striker, who has already guided the Reds to League Cup glory this term and taken them to the FA Cup final too.

"There's not much else that we can add to what we've said before so many times after a game at Anfield.

"I think you could go back over the old interviews and it'll be the same thing. They just need a bit of luck I think. It sounds repetitive but it's not an excuse.

"We're not running away from something. It's not as if there's something drastically wrong that we can't identify. It is just a piece of good fortune that we need."

West Brom manager Roy Hodgson would have been forgiven for savoring this win, coming as it did against former club Liverpool, who sacked him last season after a six month-spell in charge bedeviled by boardroom rows and replaced him with fans' favorite Dalglish.

But Hodgson was more pleased by Albion ending their Anfield hoodoo.

"It is always enjoyable to win even if you need a bit of luck on your side to achieve it," he said.

"Forty-five years is a long time for a team like West Brom not to get a result at Anfield.

"Maybe this result was written in the stars because with the last win being 45 years ago to the day maybe there is an element of fate about it.

"We know how difficult it is to get results here but another hoodoo is laid to rest and I thought it was a very determined effort from our players.

"The major satisfaction is winning at Anfield. With the team we have I don't think most people expect us to come and win here."

Hodgson failed to establish a rapport with the Anfield faithful during his time as manager but was nevertheless given a generous welcome by the home fans.

"I was very pleased by the reception and I thank the Liverpool fans for that. It was very courteous of them," he said.

Reflecting on the match, Hodgson admitted: "There was a little bit of luck there. We created two good chances in the first half which were foiled by two good Pepe Reina saves and in the second half we created a lot less and ended up scoring a goal."