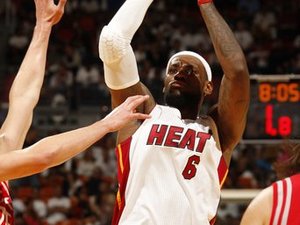 The Miami Heat, led by LeBron James's 32 points, ended Houston's slim NBA playoff hopes with a 97-88 victory over the Rockets on Sunday.

The Heat were without stars Dwyane Wade and Chris Bosh, Wade sidelined by a dislocated left index finger suffered on Saturday in a loss to lowly Washington.

In their absence, James contributed eight rebounds and five assists and Norris Cole chipped in 16 points as the Heat rallied from a double-digit first-half deficit for the victory in their last home game of the regular season.

With Houston's season on the line, Chandler Parsons scored a career-high 23 points and Goran Dragic added 16 but the Rockets couldn't hold off the reigning Eastern Conference champions.

The Heat, who still have a slim chance of overtaking Chicago atop the Eastern Conference, travel to Boston on Tuesday before closing the regular season at Washington on Thursday.