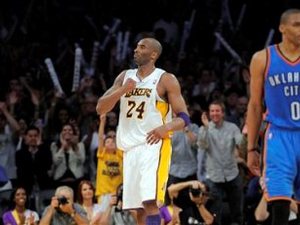 Kobe Bryant scored six of his 26 points in the second overtime as the Los Angeles Lakers rallied from an 18-point deficit in the second half for a 114-106 victory over the Oklahoma City Thunder on Sunday.

Metta World Peace scored 12 points before getting ejected late in the second quarter for a vicious elbow to the back of James Harden's head while celebrating a dunk.

Pau Gasol had 20 points, 14 rebounds and nine assists for the Lakers, who made an impressive comeback in their regular-season home finale against off-target Thunder stars Kevin Durant and Russell Westbrook, who combined to miss 42 of their 56 shots.

The Hawks took their final lead at 112-111 on Joe Johnson's 3-pointer with 1:50 left. Anthony countered with a jumper 10 seconds later for the final margin.

Amare Stoudemire blocked a dunk attempt by Atlanta's Marvin Williams moments before the buzzer. Stoudemire started at center in place of Tyson Chandler, who was resting a sore knee.

Williams, who led Atlanta with a season-high 29 points, wanted a foul call on Anthony or Stoudemire, both of whom appeared to make contact.

At Los Angeles, Chris Paul had 33 points and 13 assists, and Randy Foye hit three of his six 3-pointers in the fourth quarter as the Los Angeles Clippers rallied for a victory over New Orleans to move within a half-game of the Lakers for the Pacific Division lead and the No. 3 seed in the Western Conference.

Eric Gordon scored 17 points and Al-Farouq Aminu added 14 against their former team. They were part of the trade that sent Paul to the Clippers before the season.