Nadal Returns to Clay Form with Knockout of Djokovic 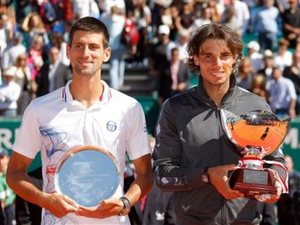 Rafael Nadal was dreaming of a seventh French Open title on Sunday after clinching his eighth successive Monte Carlo title by ending a seven-final losing streak to Novak Djokovic.

Nadal, who came into Monte Carlo with more question marks over whether or not his suspect knees would bear the stress of another grueling claycourt campaign, gave the perfect response with a swaggering 6-3, 6-1 defeat of world number one Djokovic.

The Spaniard's next assignment is Barcelona where he has been champion in six of seven editions.

"I am very happy because my knee didn't restrict my movement. I felt it a little bit, but when you can run after every ball, the pain is never a problem."

Djokovic was admittedly under-done in the 78-minute final, playing with the grief he has borne all week after learning Thursday of the death of his grandfather in Serbia.

After fighting through to three victories, he simply ran out of gas in the final.

"Djokovic wasn't the real best Djokovic," admitted Nadal. "But in other finals that I played against him, I wasn't my real best, either."

Nadal had said before the match that he was fully prepared to accept a possible eighth consecutive loss to his Serbian rival, who beat him six times in 2011 - including for clay Masters 1000 titles in Madrid and Rome - as well as winning their marathon six-hour Australian Open title match in January.

But with Djokovic suffering, the rout for the Spaniard meant a huge confidence boost as the clay season gains traction heading towards the French Open in Paris next month.

"Monte Carlo is the most beautiful Masters 1000 tournament for me," said Nadal. "To start the clay court season winning here is an amazing feeling.

"My level of tennis was high during the last four matches -- since the second round, it was very high. Today the first set was the highest moment of all the week. For that reason I must be very happy.

"To beat Novak in a final after losing a few is an important result for me. It was important to break this series and to do it here, it's perfect.

"To have eight victories, you must be lucky, you have to have no injuries, perfect conditions for eight years in a row. That's the first thing.

"And you have to be playing almost perfect to win eight titles in a row, especially in a Masters. The best in the world always play, you have to win against the best."

Djokovic admitted: "I just didn't have any emotional energy left in me.

"I was there physically, game-wise I was playing OK throughout the week. But it was a bad day. If I wanted to have any chance of winning against Rafa on clay, I needed that extra gear, which I didn't have.

"Rafa always plays well on clay, it's been like that throughout the years. Today he played just enough to win. I made a lot of unforced errors. I just wasn't there, I didn't play well."

Nadal's win was his 42nd in a row at the Mediterranean venue and marks his 47th career trophy and 20th in a Masters 1000 tournament, the first to achieve that honor.