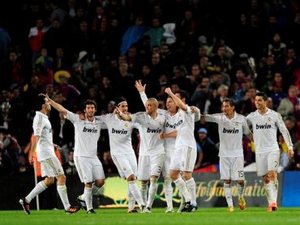 Chelsea and Bayern Munich will hope Saturday's energy-sapping "Clasico" takes its toll on Barcelona and Real Madrid when the Spanish giants try to overturn first-leg deficits in the Champions League semifinals this week.

Both contests are delicately poised, with Barca somehow 1-0 down to Chelsea despite dominating at Stamford Bridge and Madrid grabbing a potentially crucial away goal in a 2-1 loss to Bayern.

Yet while Chelsea and Bayern were able to rest almost their entire first-choice lineups over the weekend in view of the second legs, their European opponents were engaged in a high-intensity La Liga grudge match in the driving rain at Camp Nou.

Madrid won 2-1 to virtual guarantee a first title in four years and will take confidence into the second leg at the Santiago Bernabeu.

Barca, however, will have to pick itself up after a second loss in a four-day span, with its season threatening to unravel.

"I don't think we are spent physically," Barcelona coach Pep Guardiola said. "Now we have to play our best game possible. These players have been in many situations like this one and they have always risen to the occasion."

Chelsea is unbeaten in its last six matches against Barcelona and is comfortable playing in a backs-to-the-wall style, with its obdurate defense backing up its clean sheet from the first leg with another in a gritty display in the 0-0 draw at Arsenal in the Premier League on Saturday.

"It was great practice coming up against the likes of Robin van Persie, who's in form this season, and is one of the best forwards in the world at the minute," Chelsea defender Gary Cahill said.

"It doesn't get any harder, does it, this week? Facing the likes of Messi and then Van Persie and then back to Messi and the (Barcelona) boys."

Chelsea has the added motivation of perhaps needing to win the Champions League in order to qualify for next season's competition. The team is sixth in the Premier League, four points behind fourth-place Newcastle with four games left.

With Messi, a scorer of 63 goals this season, unlikely to go a third game with finding the net, Chelsea may need an away goal to advance to its second Champions League final and prevent its Spanish opponent from making the showpiece for a third time in four years.

Didier Drogba, who scored the winner at Stamford Bridge with Chelsea's only shot on target, is battling to recover from a knee injury.

Midfielder Cesc Fabregas and defender Gerard Pique were the only big-name Barca players not to start the grueling match against Madrid.

"The game on Tuesday is crucial for our season. It would be historic, incredible, to make another final of the Champions League," Barcelona midfielder Xavi Hernandez said. "A large part of our season depends on the game and we hope our fans will be with us to help us pull off the comeback."

Bayern is aiming to qualify for a final being played at its Allianz Arena home on May 19 and holds a narrow lead thanks to Mario Gomez's last-minute strike in the first leg.

Mesut Ozil's away goal is something for the nine-time European champions to cling to, however.

"Bayern has a great team but we will be playing in front of our fans," Madrid forward Cristiano Ronaldo said. "We are going to get a great result."

Ronaldo's winning goal against Barca on Saturday established his career-best tally of 54 goals in all competitions so far, and the Portugal forward will have to be kept under wraps by Bayern.

"We go to Madrid with confidence. We know what we can do. But we also know that we'll have to put out all the stops to survive there," Germany midfielder Thomas Muller said.