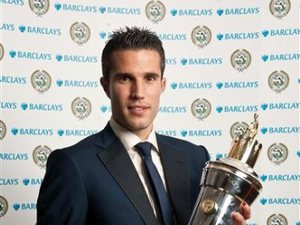 Arsenal striker Robin van Persie was rewarded for his stunning goalscoring exploits in the Premier League by being voted the player of the season by his peers on Sunday.

"It is very special because you are playing against them week in, week out and every single player does everything to win and in the end, if they make up their minds that I'm the best player it is a big honor."

In a rare injury-free season, Van Persie has carried Arsenal on his own at times after the team's poor start to its league campaign, scoring 34 goals in all competitions — a haul that included a mixture of spectacular and crucial goals with his trusty left foot.

Van Persie has scored against 17 of Arsenal's 19 rivals in the league this season, equaling the record of former club great Ian Wright.

Since the departure of Emmanuel Adebayor to Manchester City in 2009, Van Persie has moved from playing as a deep-lying forward to an out-and-out striker, bringing the best out of the former Feyenoord player who has one more season left on his contract at Arsenal.

"To be fair, when I first went there (center forward), I wasn't really as confident and I wasn't really sure I could do it," said Van Persie, who replaced Cesc Fabregas as Arsenal captain this season following the midfielder's move to Barcelona last summer. "It took a bit of time but after a couple of months a slowly realized I could do a good job there."

Tottenham right back Kyle Walker won the the PFA Young Player of the Year, and joined Van Persie in the Premier League's Team of the Year.

congratulations , you were the best indeed
go Arsenal