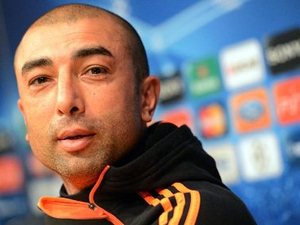 The Premier League side upset the reigning champions 1-0 in last week's first leg at Stamford Bridge, and now stand just 90 minutes away from a huge upset in Tuesday's return fixture at the Camp Nou.

However Chelsea's win last week has not been to everyone's liking, with former Manchester United goalkeeper Edwin van der Sar saying he wanted Barca to reach the final for "the sake of football."

However the interim Chelsea coach dismissed the latest barbs directed at his team, who created just one shot on goal in the first leg.

"I think you have to utilize the strength of your players and also see what the weakness of the opposition is, and try to win the game," Di Matteo said. "At the end of the day I respect other people's opinion but I disagree with them."

Di Matteo believes, however, that Chelsea will be unable to progress to the final without scoring on Tuesday.

"Ultimately Barcelona will create chances against every team they play against," Di Matteo said. "So we will have to try and score a goal tomorrow and limit the chances they create against us.

If Chelsea eliminate Barcelona it would represent a remarkable transformation in fortunes for the London club, who had looked to be dead and buried after losing 3-1 to Napoli in the first game of the knockout phase.

That game was one of the last of the Andre Villas-Boas era, and since Di Matteo took over, Chelsea have enjoyed a sharp upswing in fortunes.

Di Matteo is also adamant that Chelsea have the ability to reach next month's final in Munich.

"I think we do have the qualities within this team (to reach the final)," Di Matteo said. "We've seen in the past you do need to be able to have a little bit of luck on your side to be able to win a competition like this.

"But certainly the squad we have at Chelsea and the players we have is very good."