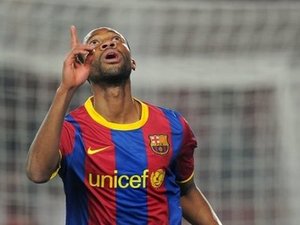 Barcelona have defensive worries ahead of Tuesday's Champions League showdown with Arsenal which midfielder Seydou Keita has described as crucial for their season.

Keita scored the only goal as Barcelona kept up the pressure at the top of La Liga with a 1-0 win over Zaragoza at the weekend and now they turn their attention to Europe where they must overturn a 2-1 defeat at the Emirates to progress to the quarter-finals.

"Against Arsenal we have to go out with a strong mentality as this is probably the most important game of the season," said Keita.

"The key is not to let them score a goal because I'm sure that (Leo) Messi, (David) Villa and Pedro (Rodriguez) will get on the score sheet in attack for us."

The bad news though for the Catalan side is that both their first choice center-halves will be missing with Gerard Pique suspended and Carles Puyol injured.

Puyol had hoped to be ready in time after a knee injury he suffered in mid-January but following a training session on Sunday he was finally ruled out.

His commanding presence at the back will be a big loss as will Pique's ability to bring the ball out of defense and open up the opposition with his range of passing.

Against Zaragoza, a make-shift side was put out by coach Pep Guardiola as he looked to rest players ahead of Tuesday's game.

Keeper Victor Valdes returned from injury but Eric Abidal, Andres Iniesta, Sergio Busquets and David Villa were all on the bench.

Abidal has been in excellent form in recent weeks and he is expected to move from full back into the centre alongside the injury prone Gabi Milito, whose Barca career has been blighted by long spells in the treatment room.

The rest of the team though should be at full strength and it will be an ominous task for the Arsenal defense as they face a forward line which has already scored 78 goals domestically.

They are arguably a stronger proposition than last season when the pair met in the quarter-finals of the competition.

Arsenal drew that time at home but in the return leg they were taken apart 4-1 thanks to a majestic performance from Messi who scored all four goals.

Since then Barça have off-loaded Zlatan Ibrahimovic and brought in Villa who has fitted in seamlessly into the side's quick, two touch attacking football.

It is true that Arsenal have also improved and will have learnt from their experience last season when they tried to play Barca at their own game and came off a clear second best.

Arsenal's second place in the Premier League is clear indication of their development with Jack Wilshire having emerged, among the exciting talent, in midfield alongside Cesc Fabregas.

While Wilshire has described himself fit after picking up a knock on his ankle in the 0-0 draw with Sunderland on Saturday, Arsenal too have important injuries with Theo Walcott and Robin van Persie out while Cesc and Alex Song are doubts but expected to be fit.

Keita, who is likely to be on the bench for Barca with Xavi, Iniesta and Busquets making up the midfield, expects a tougher clash this time round.

"It will be a different game because Arsenal will come here with more experience and with new ideas of how to face us. We are though playing well in the la liga and that gives you confidence for the other competitions," he said.