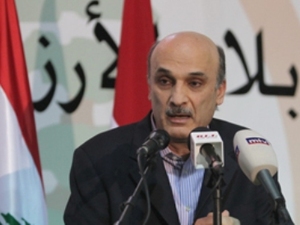 Lebanese Forces leader Samir Geagea on Tuesday said he believes that there will be “another Cedar Revolution” in Lebanon on Sunday as “the first one did not achieve its objectives.”

In an interview on Future News television, Geagea also said he was convinced that “we can’t advance in any field with the presence of Hizbullah’s arms.”

“I believe that Lebanon will be exposed to Israel if Hizbullah remains armed,” he added, warning that “Lebanon will be dragged into any military confrontation between Iran and the West.”

“We would be adding another problem to our problems with Israel. Lebanon would face less military threats if the army was in control of all Lebanese territory,” he stressed.

Answering a question, Geagea said he believes that the arrest of the Four Generals – Jamil Sayyed, Ali al-Hajj, Mustafa Hamdan and Raimond Azar – over their alleged involvement in the murder of ex-PM Rafik Hariri was “not arbitrary, until the opposite is proven.”

He accused Syria of playing a role in the January toppling of Saad Hariri’s government.

“According to my information, Syria was a partner in the coup against Saad Hariri’s cabinet,” Geagea told his interviewer.

On the other hand, he said that the March 14 coalition might call for early parliamentary elections, describing such step as “one of the possible options.”