Sfeir Describes as Abnormal Presence of Arms Outside State Control 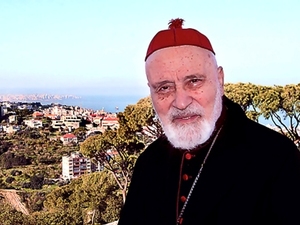 Outgoing Maronite Patriarch Nasrallah Sfeir reiterated that only Lebanon’s armed forces should carry weapons and described as abnormal the presence of arms in the people’s hands.

In remarks to al-Joumhouriah newspaper published Wednesday, Sfeir said: “We either have a state or we don't. Only the state should own weapons.”

“This is the general rule” in the world, he said. “Arms should not be in the hands of the people,” Sfeir told the daily in reference to Hizbullah.

He made his remark as the Maronite Bishops Synod begins meetings on Wednesday to elect a new patriarch.

Sfeir warned that interference in Lebanon’s political affairs could sometimes serve and at other times harm the country.

“The Lebanese should accept each other through love and cooperation because there is still meddling” in the country’s affairs, the outgoing patriarch said.

Asked if he was remorseful for not visiting Syria, he said: “Never. Why should I regret that?”

Sfeir told al-Joumhouriah that he had nothing to say to Syrian President Bashar Assad.

During his tenure, Sfeir took positions against Syria's years of interference in the country's affairs. A statement issued by the council of bishops in September 2000 calling for Syria to withdraw its 30,000 troops from the country marked a turning point in Lebanese opposition to Damascus’ hegemony.

Syrian troops intervening in Lebanon's civil war first entered the country in 1976. They withdrew in 2005 after ex-Premier Rafik Hariri’s assassination in February of that year.