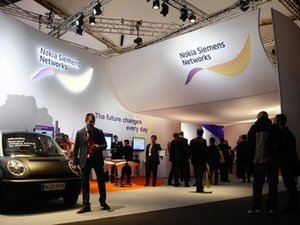 Finnish-German giant Nokia Siemens Networks (NSN) said Wednesday its purchase of Motorola's wireless network infrastructure assets would be delayed again, with no timeline specified for completion of the deal.

"Nokia Siemens Networks remains committed to the acquisition but will provide no further guidance on when it is likely to be completed," the company said in a statement, adding it was still waiting for approval from Chinese regulatory authorities.

The companies announced on July 19 that NSN would buy most of Motorola's wireless network infrastructure assets for $1.2 billion (926 million Euros), bolstering its ranking to world number two in the industry behind Sweden's Ericsson.

When NSN originally announced the deal, it expected it to be completed by the end of 2010 but this was delayed until the end of the first quarter of 2011 as it waited for Chinese anti-trust approval.

In February, NSN's Chinese competitor Huawei won a lawsuit in the United States against Motorola, in which it sought to prevent the transfer of its intellectual property to NSN through the network infrastructure purchase.

Huawei said Motorola was in possession of its intellectual property thanks to a decade-long partnership in the network business.

For its part, Motorola sued Huawei last July, accusing it of illegally obtaining confidential information about its employees.

All other necessary regulatory approvals for the transaction have been obtained.

On December 15, the European Commission gave the green light to the transaction, saying it would "not significantly impede effective competition in the European Economic Area (EEA) or any substantial part of it."

The deal has also received the approval of regulators in the United States, Brazil, Japan, Russia, South Africa, Taiwan and Turkey.

The news did not affect Nokia shares, currently at lows last seen in 1998.