Kaka on His Way Out of Real 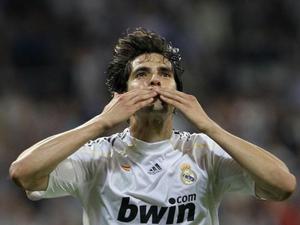 Real Madrid hopes to offload its injury-plagued Brazilian star Kaka in the summer close season, although he still has four years left on his contract, a Spanish sports daily said Wednesday.

The 28-year-old midfielder, signed from AC Milan in 2009 for 65 million euros, underwent surgery on his left knee on August 5 and only returned to training in December.

The Spanish club then announced on Tuesday that he would be sidelined for another two weeks after he injured his same knee again.

"Real Madrid will try to sell Kaka in June," the Madrid-based sports newspaper AS said in a front-page story.

"His poor showing in these two seasons determined the change in policy on the Brazilian. He was out for 85 days last season.

"The problem is that he still has four years left on his (six-year) contract at nine million euros net per season," or 15 million with taxes, said AS, which did not quote any sources for the report.

"That is a total of 60 million euros, and the big question is which club would take on that salary. Not to mention that he would not go free and there would be a market price on his transfer."

Coach Jose Mourinho "is also tired of and disappointed with the player. The coach does not understand that a star player is not involved in the group."

Earlier this month Mourinho had said he was putting no pressure on Kaka to return to form after his knee surgery in August.

"He is going through a natural process and we must continue to support him. He is a fantastic guy and a great player. We must be patient and allow him to work with no pressure. I don't put any pressure on him," Mourinho said.

The latest injury means Kaka will miss Real's next league match at home against Hercules as well as next week's Champions League last-16 second leg against Lyon.