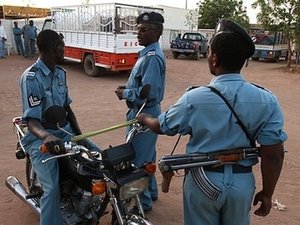 Some 500 riot police were deployed in Abu Janzeer square, in the center of the Sudanese capital Khartoum, after an alliance of opposition parties announced plans to hold a demonstration there at 1:00 pm (1000 GMT).

As soon as the demonstrators stepped into the square, the police started beating them with batons and arresting them, an AFP correspondent at the scene reported.

The police had said on Tuesday that the planned demonstration was "illegal" and that they would not allow it.

Opposition sources said the secretary general of Sudan's Communist Party, Mohammed Ibrahim Nugud, had been arrested at the site, and that three prominent figures in the communist and Baath parties were also arrested in their homes early on Wednesday.

"Early this morning the police arrested two of our leaders, including Fariq Abdelmajid, and Mohammed Dia al-Din from the Baath Party," a Communist Party member told AFP.

It also includes the northern branch of the former southern rebel movement the SPLM, as well as the smaller Communist Party and Baath Party.

The group's spokesman, Faruq Abu Issa, told a political rally on Monday that the parties had rejected an offer of talks with the government, saying that regime change was "the only way forward."

Since January, north Sudan has witnessed sporadic protests calling for regime change, civil liberties and an end to soaring prices, organized by students via the Internet and inspired by events in Tunisia and neighboring Egypt -- where popular uprising forced veteran leaders to step down.

But the Sudanese government has pursued a zero-tolerance policy towards any opposition demonstrations, with police using tear gas and batons to disperse protesters and making sweeping arrests.

On Tuesday, witnesses said police arrested 40 women in Khartoum's twin city Omdurman who were protesting against the alleged rape of a female opposition activist last month by members of the security forces.

The pro-government newspaper Al-Rai Al-Aam later reported that only 29 people, of which 25 women, were arrested and that all of them had been released.