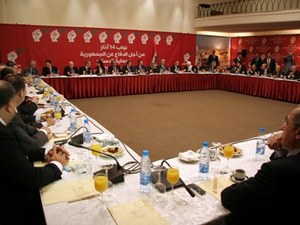 March 14 General-Secretariat Coordinator Fares Soaid said a political document that will be issued by the coalition on Thursday stresses the need to put Hizbullah’s arms under the control of legitimate state institutions.

In remarks to Voice of Lebanon radio station, Soaid said the document also says that Hizbullah cannot coexist with citizens who abide by rules and regulations.

As long as there are arms outside the control of the state, “the Lebanese Republic will not be formed,” the March 14 official said.

The goal of the March 14 campaign is “to organize a peaceful, democratic opposition to the weapons of Hizbullah, all militias in Lebanon and the weapons inside and outside the Palestinian camps,” Soaid told The Daily Star.

Soaid expressed optimism that the alliance’s campaign against Hizbullah’s arms would succeed although its results would not be as quick as in Egypt and Tunisia.

Inter-Lebanese relations should be settled under the Taef Accord, he told VDL.

An Nahar daily said that the document, which will be launched following a large-scale meeting of March 14 leaderships at the Bristol Hotel in Beirut at 5:00 pm, vows to achieve the alliance’s objectives by four means: The March 14 MPs bloc (a term used for the first time), parties, independents and civil society.

The document finally calls for a massive turnout at the rally that will be held at the Martyrs Square on Sunday “where the people would be stronger than weapons,” An Nahar said.