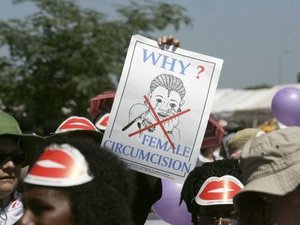 Two people were arrested in Britain's second city of Birmingham on Friday after a media report that medics and alternative practitioners had offered to perform female genital mutilation.

West Midlands Police said they had arrested two men aged 55 and 61 on suspicion of offences under the Female Genital Mutilation Act 2003, which forbids the cutting of a girl's genitalia unless medically necessary.

The arrests related to articles published in The Sunday Times newspaper on April 22, police said in a statement.

"We are still in the very early stages of this investigation but I hope this morning's action sends out a clear message about how seriously we are taking these allegations," said Detective Inspector Caroline Marsh of West Midlands Police's public protection unit.

"Female genital mutilation is a serious assault against young girls and while it is perceived by parents not to be an act of hate, it is harmful, it is child abuse and it is unlawful."

The Sunday Times reported that a doctor at a private clinic referred undercover reporters to a dentist who he said would give children the "circumcision" surgery.

The dentist then agreed to perform the operation, the newspaper reported. It said an alternative medical practitioner had separately also agreed to carry out the operation.

Britain's interior ministry estimates that 24,000 girls under 15 are at risk of genital mutilation (FGM), but it has secured few convictions since outlawing the procedure.

Numbers of women and girls in Britain subjected to FGM have increased along with immigration from countries in the Middle East and Africa where it is practiced, The Sunday Times said.

Some 100 to 140 million girls and women globally are thought to have undergone FGM, which ranges from removal of the clitoris to more widespread mutilation, and can lead to infection and long-term severe pain.

The practice is thousands of years old.