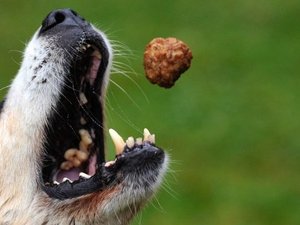 "Humans can become ill by handling pet products contaminated with salmonella, and by coming in contact with pets or with surfaces that have been contaminated," Ohio's health department said in a statement.

Health officials cautioned pet owners to wash their hands before and after handling pet food and treats and prior to preparing or eating their own food.

They also recommended that pet owners wash their hands after touching or feeding their animals and to carefully clean any counters or surfaces used to prepare pet food.

"Because infants and children are especially susceptible to foodborne illness, keep them away from areas where pets are fed," the health department said. "Never allow them to touch or eat pet food."

A four-month-old baby and a 74-year-old woman were among those sickened by the tainted dog food made by Diamond Pet Foods, which has been recalled from the market.

No deaths were reported, but five people were hospitalized.