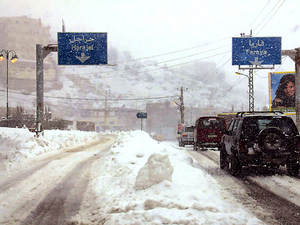 A snowstorm that has been lashing Lebanon since Wednesday is expected to subside over the weekend after claiming three victims in the Wadi Khaled region in Akkar.

The National News Agency said Thursday that Abdullah Rayya, Hassan Shmaisi and Walid Rayya, from the Syrian village of Maajir, were carried off by Nahr al-Kabir while riding their tractor on the Syrian side of the border.

Syrian and Lebanese authorities, along with locals, are carrying out intensive search efforts to find them, the NNA added.

The meteorology department expected snowfall at 1000 meters above sea level on Friday, a day after snow fell at 900 meters in the north, while in Hasbaya, the snowfall was reported as low as 500 meters.

The meteorology department said Sunday will be sunny.