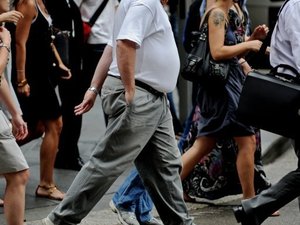 People who drive long distances to work are more likely to be overweight and have poorer fitness levels than people who live closer to their jobs, a U.S. study said Tuesday.

The study in the American Journal of Preventive Medicine was based on data from nearly 4,300 people in Texas near the major metropolitan hubs of Dallas-Fort Worth -- one of the top five most congested areas in the United States -- and nearby Austin.

"This study yields new information about biological outcomes and commuting distance, an understudied contributor to sedentary behavior that is prevalent among employed adults," she said.

The long commuters, not surprisingly, also reported going to the gym or getting physical exercise less often than people who drove shorter distances to their jobs each day.

Commuters who traveled more than 15 miles (24 kilometers) to work were "less likely to meet recommendations for moderate to vigorous physical activity, and had a higher likelihood of obesity," according to the findings.

Although the research did not examine other sedentary behaviors such as television watching, but Hoehner suggested future work could examine the time spent sitting across multiple scenarios to better determine how commuting affects health.