Alleged ‘Cancer Cure’ In Vietnam a Threat to World Rhinos 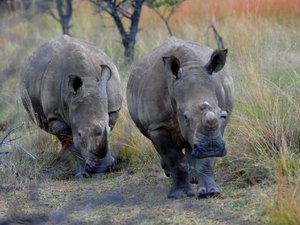 For desperate Vietnamese cancer patients ground rhinoceros horn is seen as an elixir of life -- a medically unproven and illegal obsession that threatens the very survival of the world's wild rhinos.

The substance, which shares the same protein found in human fingernails, sells for thousands of dollars an ounce in Vietnam. Soaring demand has led to a bloodbath in South Africa as poachers kill record numbers of the creatures.

"I have lots of money, I am old (and) I just love to live... I have no reason not to spend money on buying the expensive rhino horns and drinking its powder if it helps me," said Hung, who asked his real name be withheld.

Targeted medical studies have shown that rhino horn has no medical benefits. Two cancer patients taking rhino horn as part of their treatment who were contacted by AFP for this story died before interviews could be arranged.

But many in Vietnam believe the horn has miracle healing properties and the communist country's voracious appetite for the substance has become the main driver of global demand.

Tran Thi Hiep, a 60-year-old retired official who discovered a tumor on her neck six years ago and has been using rhino horn, said that traditional Vietnamese culture encourages people to try every possible treatment.

"When we are sick, we should pray to the four corners of the earth for a cure," she said, quoting a common Vietnamese saying.

On Hanoi's Lan Ong street, a bustling hub for traditional medicine, nearly every shop sells special ceramic dishes that have a coarse surface on which rhino horn is gently grated down.

"Rhino horn is used to prevent and to cure cancer... You need to grind it into a powder before serving it with water or alcohol," Tran Thu Thao, a specialist in Vietnamese traditional medicine, told AFP.

There is also a huge trade in counterfeit horn as local demand far outstrips supply and Thao said well-known traders have months-long waiting lists for the genuine substance.

Buying and selling rhino horn is illegal in Vietnam, but enforcement is lax and prosecutions for smuggling horns into the country are few and far between -- the last was reportedly in 2005.

Traders also exploit legal grey areas, legally importing "trophy" horns from licensed shoots in South Africa that conservation groups say can then disappear into the blackmarket because Vietnam does not conduct follow up checks.

"Rhino horn is now well beyond simply a luxury item used as a symbol of status," said Naomi Doak of conservation group TRAFFIC, adding that the horn was also in demand as a cure for a variety of even mundane ailments.

The trade has become a lucrative business for criminal syndicates.

"There is a lot less risk involved with smuggling rhino horn than with drugs, in terms of detection, prosecution and penalties, and you get more money for the rhino horn," she said. "This is now seen very much as the key threat to (rhino) conservation."

An explosion in Asian demand for horn saw a record 448 rhinos poached in South Africa last year -- compared with just 13 in 2007 -- and the rate is increasing, with over 170 killed so far this year.

Vietnam's own critically endangered species of rhinoceros, the Javan rhino, was poached to extinction in 2010.

A surge in hunting permit applications from Vietnam has prompted South Africa to suspend issuance and ask Hanoi to conduct inspections to verify that exported trophies are still in the possession of the hunters.

But senior police man Tran Huy Tu, who had a stroke three years ago and is himself an ardent user of rhino horn, say such efforts will likely be in vain.

"Vietnamese have been going to South Africa to try and bring back rhino horns for years," said Tu, who asked that his name be changed to avoid prosecution.

"I can drink a lot of alcohol but I am still sober and strong. I don't have a headache and I do not feel tired. It has some effects, I believe," Tu told AFP. "It's not legal to buy this stuff, but in Vietnam you can buy anything with money -- or lots of money," he said.