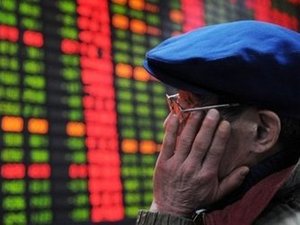 It was too early to assess the economic damage, but the quake, centred off northeast Japan, had a magnitude of 8.9, making it the country's biggest ever and the seventh largest on record globally. It unleashed a 10-metre high tsunami that sparked fears of destructive waves across the Pacific Ocean.

The market was already weighed down by unrest in the Middle East, eurozone debt worries, a wider-than-expected US trade deficit and China's announcement of a rare trade deficit for February.

Economic tremors were felt elsewhere, with the currencies of a number of at-risk Asian countries weakening against the dollar.

Shares in German insurance groups such as Munich Re and Allianz plunged as such firms appeared set to take a hammering from the quake.

The falls came after steep losses on Thursday, when Shanghai lost 1.50 percent, and on Wall Street, where the Dow, Nasdaq and S&P 500 indexes all ended down more than 1.8 percent.

Markets were also nervous about the intensifying conflict in Libya and unrest in OPEC oil linchpin Saudi Arabia.

"The recent Middle East unrest is spreading to Saudi Arabia, triggering fears in the financial markets across the globe," Kim Joong-Won, an analyst at HMC Investment Securities in Seoul, told Dow Jones Newswires.

Alistair Thornton, an analyst at IHS Global Insight, commented: "We believe inflationary pressure will remain quite high over the next couple of months. More tightening measures are in the pipeline."

Oil prices were retreating even before Japan's quake due to Europe's debt troubles -- amplified by a downgrade of Spain by ratings agency Moody's -- and data showing that China experienced a rare trade deficit in February.

Both factors suggested the possibility of slower economic activity and thus smaller demand for oil.

Benchmark crude prices dipped below $102 in Asian trade after easing off two-year highs.

The yen steadied after taking a sharp fall immediately after Friday's quake, while the euro rebounded against the dollar having plunged after a Spanish ratings downgrade.

The yen fell to 83.30 to the dollar as dealers rushed away from the earthquake risk, but recovered in the late afternoon to 82.89 to the greenback, compared with 82.91 in New York late Thursday.

Insurance company and fund manager Tower fell 4.1 percent to NZ$1.86 after it announced its costs related to the Christchurch earthquake were expected to reach NZ$15 million-NZ$20 million ($11 million-$15 million). Retailer Warehouse rose 2.1 percent to NZ$3.45 after better-than-expected first half results.